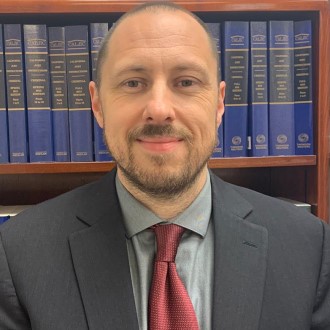 Jason T. Campbell is a criminal defense attorney and has worked with Bay Area Criminal Lawyers, PC for more than a decade. Mr. Campbell graduated summa cum laude in 1999 from Virginia Commonwealth University in Richmond, VA earning a Bachelor of Science degree in Physics as well as minors in Mathematics and Chemistry. Mr. Campbell then taught high school math and physics in Long Beach, CA for four years before choosing to continue his education by enrolling in U.C. Hastings College of the Law. While there, Mr. Campbell spent time advocating for the homeless at General Assistance Advocacy Project, served on the editorial board of U.C. Hastings’ Race and Poverty Law Journal, served as co-president of Hastings’ National Lawyers Guild chapter, and completed the intensive curriculum of the Criminal Law Clinic offered by the school. Mr. Campbell graduated from Hastings in 2007.

In addition to his academic background, Mr. Campbell obtained experience working in the field of eviction defense as a law clerk at San Francisco’s La Raza Centro Legal. In the summer of 2006, he began working as a certified law clerk at the Marin County Office of the Public Defender where he gained valuable experience writing and arguing motions as well as participating in two trials.

Prior to becoming a criminal defense attorney, Mr. Campbell has been committed to issues related to social justice since his youth and has worked in a variety of fields in an effort to provide support to those in need of assistance. He carries out his work in the criminal defense field with these same commitments in mind and brings to his practice a sense of respect for his clients and a desire to work closely with them to obtain the best possible results in their cases.

For more than a decade, Mr. Campbell has represented defendants at every stage of the criminal justice process, in both state and federal courts. Since 2013, Mr. Campbell has worked to represent those individuals who are in the most perilous situations. Already convicted, their convictions affirmed on direct appeal, they are, for all intents and purposes, lost to the system, unless and until they can vindicate their rights through the unwieldy and labyrinthine habeas corpus process.

Mr. Campbell has zealously defended his clients at the trial level, obtaining favorable results, outright dismissals, and even, in one instance, convincing prosecutors to release a man wrongfully accused and held in custody for nearly two years on murder charges. As a post-conviction attorney, Mr. Campbell has obtained new trials, had convictions reversed, and sentences reduced on direct appeal and collateral review. He is committed to protecting the rights of his clients and quelling the unjust actions of police and prosecutors whose myopic view of defendants and ends-justify-the-means approach to criminal justice yields innumerable wrongful convictions.